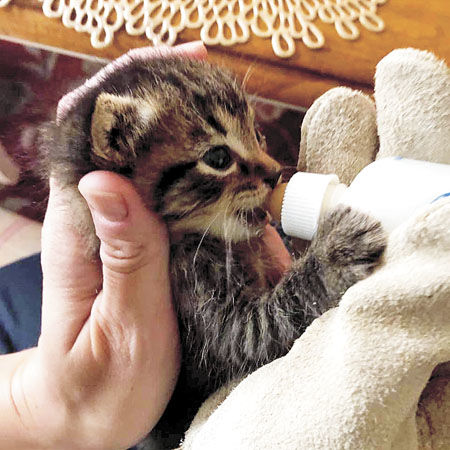 Helping feed a hungry kitten is one of the joys of the job at Fortunate Felines Farm. 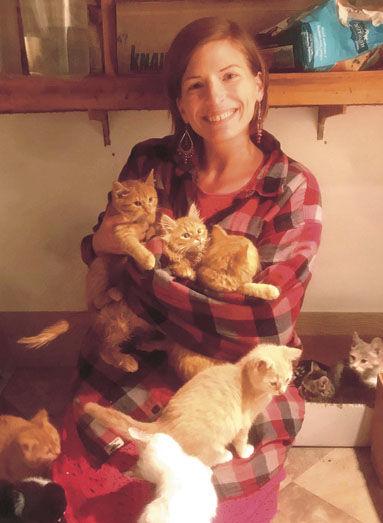 Jackie Hegge is determined to help control the city’s feral cat problem, one kitten at a time.

Helping feed a hungry kitten is one of the joys of the job at Fortunate Felines Farm.

Jackie Hegge is determined to help control the city’s feral cat problem, one kitten at a time.

Jackie has loved cats all her life; and like many in our town she’d notice those all too familiar feral (wild) cat colonies seen roaming the streets of Pine City or begging on doorsteps. One afternoon in October of 2018, Jackie was having lunch with her husband Tom at a local eatery and noticed a litter of feral kittens hiding in and around a dumpster. Knowing the future was bleak for those kittens, Jackie came up with a plan. The next morning,  she returned to the litter of kittens with live traps she’d rented and trapped the babies. Feral kittens/cats are typically very scared of humans and can be violent. After spending time with the kittens, Jackie was able to give them baths, treat them for mites and fleas and have them sterilized (spayed and neutered).

Taking time from her daily routine to help familiarize the kittens to humans, Jackie attempted to socialize them and was eventually able to find each one a forever home.

Seeing those kittens adopted by loving homes was only the beginning of Jackie’s ultimate goal.  From that one litter of kittens came more and soon began the ‘Fortunate Felines Farm’ (FFF); her very own rescue organization devoted solely to sterilizing and rehoming unwanted kittens.The number of feral and stray cats in this country has become an epidemic. Well-intended people try to help these cats by bringing them to shelters, but sadly 70% of the cats sent to shelters end up being euthanized. On average, 1.4 million cats are euthanized in the United States each year. The problem,  as Jackie stated,  isn’t a cat problem – it’s a people problem. When people have intact (not yet sterilized) cats around, whether it be a barn or an outside cat, they inevitably lead to hundreds of unwanted kittens. An unaltered male and female cat having an average of 2 to 3 litters a year of offspring can result in over 420,000 kittens in only 7 years. Most of those cats will be killed by cars and other animals or they’ll die of starvation and disease.

The truth is, many of us have noticed the problem yet we don’t really know how to help. The great news is that we have people like the Hegge family who are willing to step in and help stop the feral cat epidemic in our community.

Since that litter of kittens in the dumpster back in 2018 Jackie, with the help of her husband Tom, has rescued, sterilized, and rehomed 137 kittens.

Saving these cuddly little fur balls isn’t easy and comes with a big set of challenges for Jackie and her family. One of her sons is highly allergic, and therefore a building specially made for the kittens had to be built separate from the Hegge home. A weak immune system has Jackie routinely compromised to illness, bacteria, and bites by feral kittens whom she’s trying to socialize. Jackie, a retired in-home child care provider,  had to pick up another job in order to cover the mounting costs of running the FFF. Through a GoFundMe account and sharing stories on her Facebook page, Jackie has received some financial help but said the Hegge family themselves have spent over $12,000 of their own money to support the rescue. She said they have submitted an application to become a federally registered nonprofit and are awaiting final approval.

Jackie said the cost to foster each kitten differs with the needs of those brought to her. Some come to her healthy and are able to be sterilized and sent to new homes quickly, while others come with a whole set of seemingly impossible odds to beat. Recently,  one special kitten had to have an eye removed, is mostly blind, and needs to be given prescription eye drops for her entire life. Those cases of long term injury or illness have cost Jackie and Tom thousands.

When it comes to finding homes for these kittens, Fortunate Felines Farm only asks the adopting family cover the low cost of the spay or neuter. She doesn’t account for the time spent setting up appointments, gas expenses driving the kittens to the clinics,  deworming, treating them for mites and fleas or the time the family spends socializing each kitten. Each rescue is rehomed for $75 or less. Jackie said she is always up front and honest about which home each kitten will thrive in. Some cannot be with other pets or with children while others need ongoing medical attention or special circumstances. She’s self-proclaimed ‘picky’ about who adopts each kitten in her effort to ensure that they’ll have long lives in a forever home that loves them.

As if rescuing tons of unwanted kittens didn’t keep Jackie busy enough, recently she began hosting “Spay & Neuter Clinics” where people can bring their cats to her and she’ll take them to a veterinarian to have them sterilized, she then returns them to their owners for a very low cost. Through these efforts,  she’s helped pet owners sterilize 80 cats with another low cost clinic coming in March where she and her husband will bring 50 more cats to be fixed.

In her newest quest, Jackie has now begun efforts to safely trap the unaltered felines that hang around in the Pine City area and have them vaccinated,  fixed, ears tipped and then released. (Ear tipping is done while cats are under for surgery and is the only way for people to recognize that they’ve been sterilized and vaccinated for rabies; therefore posing no threat to other animals or pets).   While Jackie cannot possibly home all of the feral adult cats she traps, she is trying her best to halt further breeding – again at her own cost.

Her efforts have snowballed in our community. People are more aware of the stray cat issue in our town, low income families now have easier access to sterilization of their family pets and people are looking at the “old barn cat” in a whole new light. The explosion of stray,  sad, sick, unwanted and unloved kittens is subsiding in our area. Jackie is an example of what one person can do to change the world. What started as one selfless act by someone who stood to gain nothing turned into hundreds of selfless acts in the past year and a half.

If you would like to know more about the efforts of Jackie Hegge, follow her story, adopt a kitten, or make a donation, visit her Facebook page, Fortunate Felines Farm. Donations can also be made at Frandsen Bank.