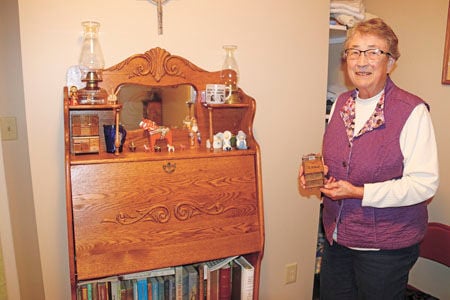 Margaret Kiehn with the actual stand and the mini version from the farmhouse where she grew up. 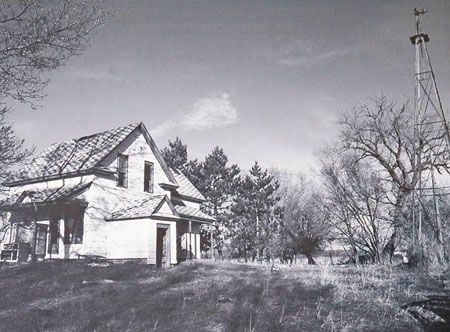 A photo of the orginal farmhouse 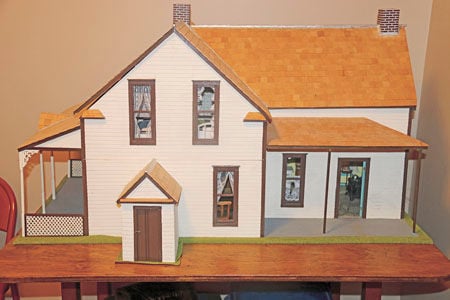 The model that’s based on the house. 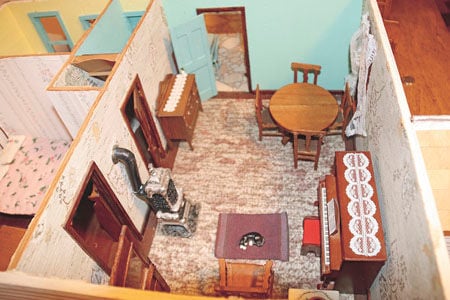 While many of the items were handcrafted by Margaret, some items, such as the woodstove and piano, were purchased from a store in Florida. 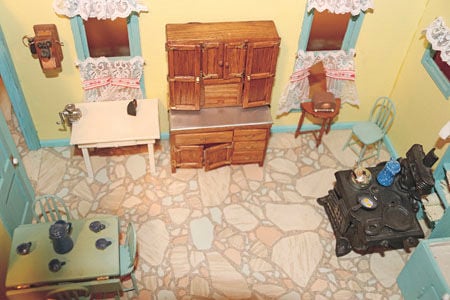 The linoleum in the miniature kitchen is from the orginal linoleum from the farm’s kitchen.

Margaret Kiehn with the actual stand and the mini version from the farmhouse where she grew up.

A photo of the orginal farmhouse

The model that’s based on the house.

While many of the items were handcrafted by Margaret, some items, such as the woodstove and piano, were purchased from a store in Florida.

The linoleum in the miniature kitchen is from the orginal linoleum from the farm’s kitchen.

Memories of growing up in a farmhouse have been recreated by Margaret Kiehn of Moose Lake. She built a replica of that farmhouse and recreated miniature furniture just like the furniture that once occupied the house.

Margaret has two of the pieces from her former home, a stand and a desk, in her present-day home. Wide baseboards from the farmhouse kitchen were removed, planed and repurposed into a china cupboard that she now has in her living room. The lower cabinet doors are made from wainscoting from the home.

But it is the miniature home that is the most fascinating.

“The house was built in the early 1900s,” she explained. “It was located six miles northwest of Rush City. My family moved there in 1944 when I was 5. I had an older brother and sister. The original homestead was 120 acres but my dad bought two forties so it grew to 200 acres.”

Margaret explained that her dad was a dairy farmer. He sold the cows in 1958 when he was suffering from a heart condition. He died at the age of 67.

“Mom lived there for many years after he died and rented out the land,” she added. “She sold the farm and moved to town in the 1990s.”

Margaret lifted off the roof to reveal the upstairs bedrooms. Wire was bent and shaped to resemble an iron bedstead and a quilt and pillow, all made by Margaret, was on the bed. A miniature dresser with drawers that open was against the wall.

Furniture for the other bedrooms have been recreated, again, with quilts covering the beds.

“I made all of the quilts and pillows and pillowcases,” Margaret said.

She lifted off the second floor of the home and revealed the rooms on the first floor.

A chair sat by the radio in the corner of the kitchen.

“My dad used to sit there and listen to baseball on the radio,” she said. “He listened to games played by the Minneapolis Millers and the St. Paul Saints.”

A dry sink has been placed in another corner.

“We never had running water in the house,” said Margaret. “My dad had a basin of water on the dry sink and a mirror above where he would shave.”

A cookstove between the dry sink and his chair is where her mother cooked the meals. A blue enamel coffeepot, aluminum teakettle and a cast iron frying pan with two eggs in it are on the stove.

A Hoosier cupboard was centered on the outside wall. The cupboard was a workstation for baking and equipment storage that were used by women in the late 1900s to 1940s, according to the Kountry Kraft website.

Against the wall between the doors to the dining/living room and the pantry is the kitchen table, complete with a coffeepot and cups waiting for company. “I made the flaps on the table so they could be lifted and set into place,” said Margaret.

A meat grinder and an iron on a worktable by a window is a reminder of the work involved in preparing food for meals and ironing cotton clothing.

A crank phone on the wall brought back memories of the party line, where people could hear everyone’s rings and listen in to the conversations of others.

“That was called rubber necking,” said Margaret. “The telephone system was owned by the farmers back then. The first meeting of the cooperative that owned the lines was held at our house. My brother has the book of minutes of the meeting that tells who all was there. My uncle later became the treasurer and held that position for many years.”

The dining/living room has a round table in the corner, with four chairs.

“I split the table and made two leaves that can be placed in the center to make room for more people,” said Margaret. “I used leather from an old purse for the leather seats on the chairs.”

Margaret still has the rocking chair that she recreated in miniature.

Not all of the furnishings were made by Margaret.

“There is a place in Florida where I have ordered things for the house,” she said. “I ordered the two stoves, the piano, a rug on the floor in the living room and a cat sleeping on the rug from that company. They even have tiny nails, hinges, and handles for the drawers. I also bought the shingles and siding there.”

The walls of the home are papered.

“Someone found samples of old wallpaper and gave them to me,” Margaret explained. “I still had a piece of the original linoleum that I used on the kitchen floor and I found a sample of vinyl that resembles the carpet in the living room.”

One year, Margaret put a Christmas tree in the house and strung tiny lights on it.

“My son told me that he expected to see Grandpa come walking into the room,” she said.

Margaret spent 20 years working on the house and the furnishings.

“I would work on it after I got home from work,” she said. “The time would fly by. It was pure joy to build this house and furnish it. My 11 grandchildren just love it but they know not to touch anything.”

For more information about the miniature home and furnishings, call Margaret Kiehn at 218-485-4276.

Sorry, there are no recent results for popular commented articles.