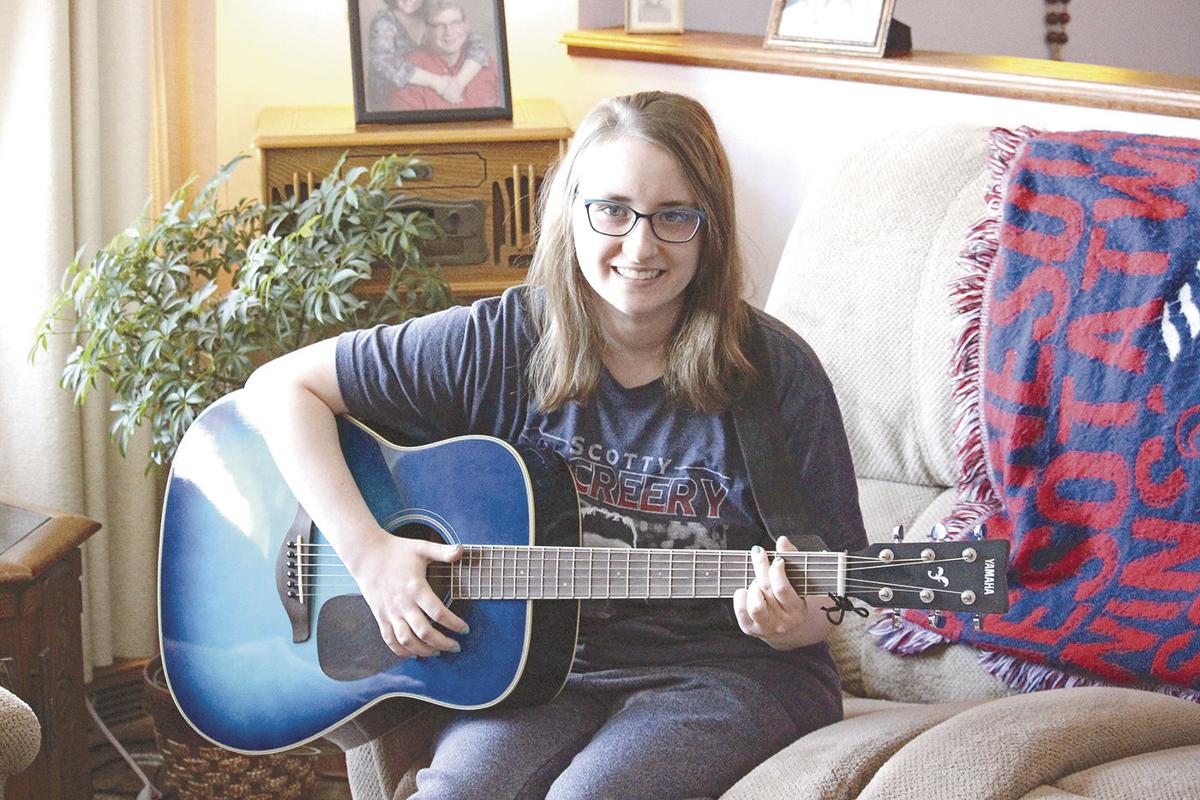 When told by doctors that she may never play guitar again after her brain surgery, Abby Skluzacek had two words: “Watch me.” 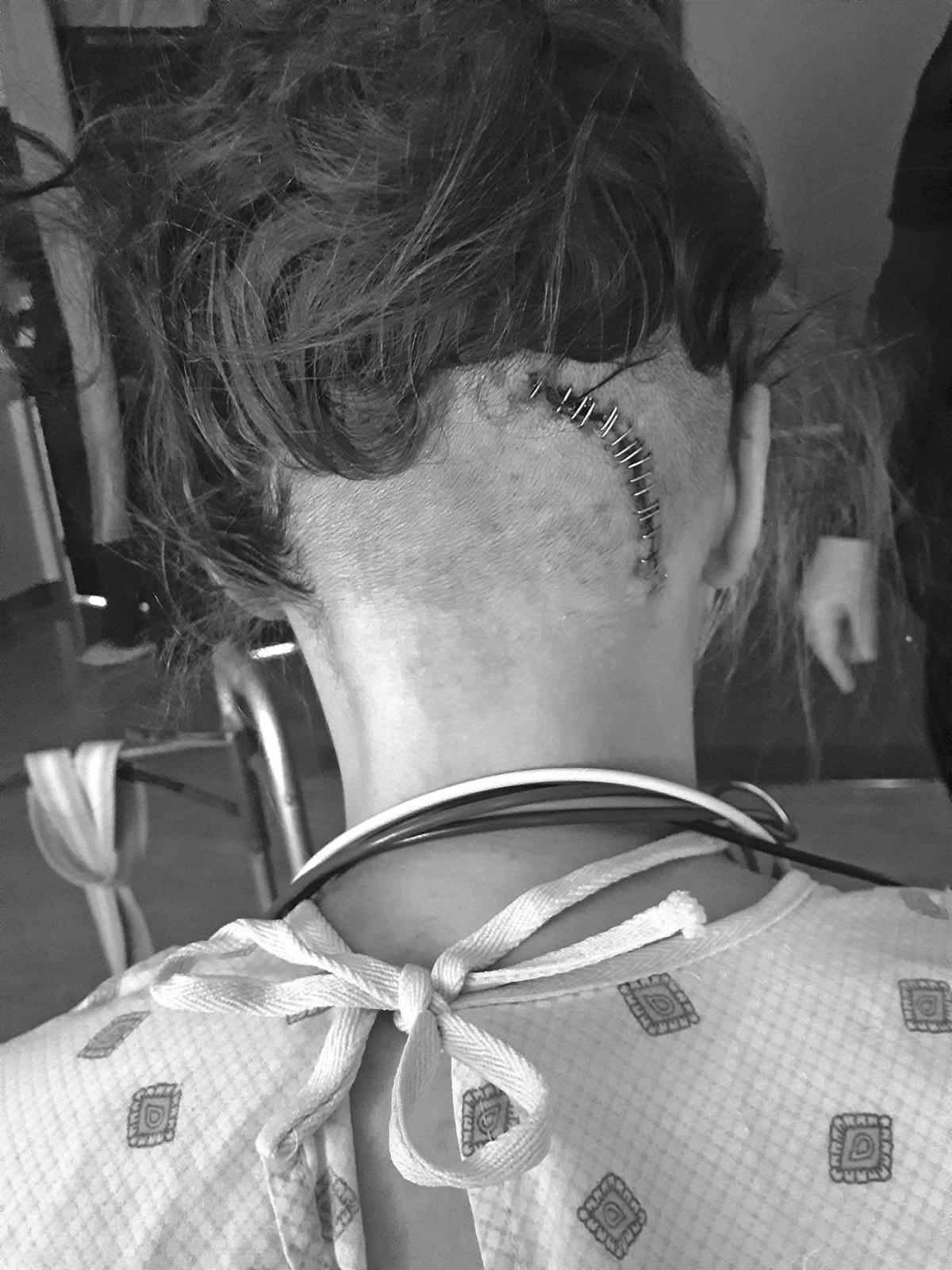 Doctors have now gone into Abby’s brain twice, first to stop the bleeding caused by the ruptured AVM, and the second time to remove the AVM entirely.

When told by doctors that she may never play guitar again after her brain surgery, Abby Skluzacek had two words: “Watch me.”

Doctors have now gone into Abby’s brain twice, first to stop the bleeding caused by the ruptured AVM, and the second time to remove the AVM entirely.

She had a time bomb in her skull. It had always been there – a little knot of abnormal blood vessels getting closer and closer to rupturing.

But Abby Skluzacek had no idea. Neither did her family. You don’t think about things like that when you’re just 22.

It was snowing hard on the morning of Jan. 18 and the inches were piling up. Inside her family home in Pine City, a little after 5 a.m., Abby became suddenly awake.

“I had horrible jaw pain on my right side, and I started seeing triple,” she said. “I just thought ... I’ll just sleep it off. It’s fine. But then, my head started hurting – pain I’ve never felt before. So, I started screaming for my mom.”

She thought she would run her head under some cold water so she tried to head to the bathroom. But she never made it out of her bedroom.

“I stood up, and my legs instantly gave out,” Abby said. “I laid on the floor and started screaming for her more. It was hours for me, but in reality it was just a couple of minutes.”

The bleeding in her brain had already affected her speech. Her calls for help were incoherent shrieking. Her mother Robin didn’t know what the noise was, but she headed upstairs to her daughter’s bedroom. She found her on the floor, wailing and sweating. Abby was telling her to call an ambulance. Robin couldn’t make it out, but she knew enough to wake up Abby’s dad Loren and they called 911.

“She kept grabbing my hand,” Loren said. “I was trying to make out words. It was really hard to understand, but I kind of caught that her head was hurting.”

Loren ran out to snowblow the driveway to make room for the ambulance while Robin stayed with their daughter. After the ambulance arrived, they followed it to Welia Health in Mora.

Doctors took a CT scan of her brain and found the bleeding. They wanted to take her to Abbot Northwestern Hospital by helicopter, but it was snowing too hard to fly, so they brought her through the snowstorm to the CentraCare hospital in Saint Cloud.

After running tests, the doctors made a plan to let the swelling in her brain go down then do surgery the next day. They sent Robin and Loren down to the cafeteria to get something to eat. But even as they were sitting there, they got a message that the doctor wanted to see them.

“He said it would have been fatal,” Robin said.

So Abby was brought into surgery, where the surgeon cut into the back of Abby’s skull, removed the brain clot and inserted a metal plate to protect it.

The next day, when the results of her tests came back, they all knew the right decision had been made. Abby’s condition was improving.

The doctors also had a diagnosis – A brain arteriovenous malformation (AVM). The cause of AVM is not clear. Most people are born with them, but they can sometimes form later in life. Abby was the youngest patient with a ruptured AVM the doctors had ever seen.

“It’s on its own time schedule,” Loren said. “When it decides it wants to go, it’ll go.”

Loren and Robin spent the next seven days in St. Cloud with Abby as she lay in her hospital bed recovering.

“The one thing that was really frustrating after surgery, they told her to take her left hand and touch her nose,” Loren explained. “She took her right hand and she was looking for it.”

“I was touching my cheek or my mouth or my forehead,” Abby said. “At first it was like, I knew I had an arm but I couldn’t feel it ... like it wasn’t all there. But now it’s better. Now I can touch my nose.”

After Abby returned home in late January, she started going to physical, occupational and visual therapy. She said they are all helping her recover.

“I couldn’t walk on my own,” she said. “Now I can. I was seeing double, and I have special glasses now.”

When her recovery first began she was slurring some words and mispronouncing others.

Someone has needed to stay with Abby at all times in case the AVM began bleeding again, and the Skluzacek’s other children Alex and Adam have been pitching in along with Abby’s boyfriend, Kyle.

She kept positive through the end of March, when she had to have a second brain operation. The first was to stop the hemorrhaging; this was to fix the AVM once and for all.

There was a small chance that this operation could have set Abby back further. But when the doctors spoke to Robin and Loren, they had only good news.

“The whole AVM was removed successfully and there was no further neurological damage,” Robin said. “The healing and recovering process can begin.”

The Skluzaceks said they are very grateful for all the support they received from the community through this experience:  sending flowers, putting Abby’s name on prayer chains and much more. Other people in the Pine City area who have dealt with AVM have reached out, and Abby’s friends started a GoFundMe page at gofundme.com/f/abbyskluzacek.

“We’ve been just overwhelmed by the generosity of people,” Loren said.

“We believe in the power of prayer,” Robin added.

And Abby herself is bringing her determination and a positive attitude to her recovery. She is looking forward to going back to school, to traveling, and to continue pursuing her dream of becoming a professional singer/songwriter.

“A lot of people could have gone into depressed mode,” Loren said. “‘Why me, why me?’ Abby hasn’t been that way. She’s getting back to herself too, because she was yelling at me the other day, “Garbage needs to go out.”

Abby has sung the National Anthem at the Pine County Fair Demolition Derby before, and intends to do it again this year as a first step towards continuing her career in music.

“[The doctors] said, ‘You may never get the full use of your hand back,’” Robin explained. “Abby said, ‘This is the hand I play guitar with. Watch me.’”