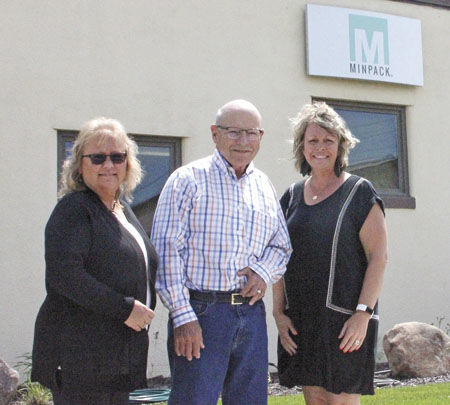 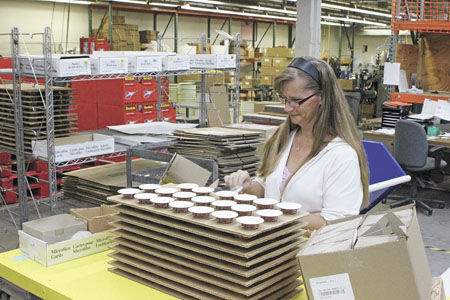 Minpack’s Ruth Parsons assembles sticky notes in a container that can attach to a desk with a suction cup – just one of the hundreds of products that Minpack helps manufacture each year.

Minpack’s Ruth Parsons assembles sticky notes in a container that can attach to a desk with a suction cup – just one of the hundreds of products that Minpack helps manufacture each year.

Just a few years back, it looked like Pine City was about to lose a major manufacturing plant and employer.

After it was saved by a longtime Pine City resident, the new owner had to take a hard look at the future, at what they had to do to make this reborn business succeed.

Bob Thompson, the president/CEO of Minpack, Inc., gets excited when he talks about turning ideas into objects.

“This is brand new,” Thompson said.  “We haven’t made this yet. But this is a special spoon for your teabag. It looks like a cardboard teabag but turns into a spoon with a teabag at the end.”

The one-time-use item was developed by a company that Minpack already does business with.

“There is no plastic,” Thompson explains, turning the unfolded spoon over in his hands.  “The inks are food-safe and the spoon retains its shape in hot water. It’s a unique material – it was developed in Germany.”

The company that invented the product is now looking for someone to produce it. Thompson hasn’t quite worked out how to make this at Minpack yet, but he will.  He has figured out how to make many, many different things. In a single week, Minpack manufactures scores of products – and each week they produce more.

“Altogether, I guess it’s around 200 [products] this month,” he said. “We make a lot of different stuff.”

From Iowa to Pine City

Thompson was drawn to making things at a a young age. He grew up on a farm in Iowa, and  had cousins who lived near Pine City.

“When I was a little guy we used to come here for vacation in the summer,” he said.  “I always liked the area.”

While working in Cedar Rapids in the 1960s he was selected for an apprentice engineering program.

“We were going to the moon and there weren’t enough engineers,” he said. “So I had an awesome chance to get an education there.”

Thompson was living in Pine Cit,y but still working in Minneapolis, when 3M opened its Pine City plant in 1968. The plant specialized in one product: microfilm cards.

“It took just about everyone in Pine City,” Thompson said. “They ran seven days a week on a swing shift. About 100 employees in those days.”

During this time, Thompson was still working as a contract engineer for a number of companies, including 3M

‘THE PLANT WAS GOING TO GO AWAY’

Thompson continued working with 3M, commuting down to their Twin Cities offices for more than 25 years.

“I lived here, so there was no cost to move me here,” Thompson explained.

In 2002, Imation assets – including the Pine City plant – were sold to DecisionONE in Philadelphia.

DecisionONE asked Thompson to stay on as manager of the operation Pine City. But Thompson wasn’t about to take the job unless they agreed to his terms.

“I told them I would do that on one condition, and that was, if they ever wanted to divest of the assets that I wanted first right of refusal.”

Thompson knew that DecisionONE’s focus was in information technology, not manufacturing. He figured it wouldn’t be long before they either decided to unload the plant or close it down.

“My sense at the time was that the plant was going to go away if the wrong person bought it,” he said. “I was committed to keeping it in the community. So in 2005 we worked out a deal where I acquired the assets and created Minpack.”

By that time there were only 18 workers left in the plant. Lori Buck, who had started in 1982, was one of those employees.

“I’ve been at the same place, but I’ve worked for four different companies,” Buck said. “Coming from 3M and then being spun off, it was just a shocker. You just didn’t have the sense of security anymore. Everybody was glad [when Thompson bought the plant] because they felt like, maybe we can make it here.”

And they have. Minpack currently employs 41 workers in Pine City – including Buck, who has moved up from assembly line worker to plant controller.

Minpack gave a new lease on life to the manufacturing plant, but Thompson knew that they would have to take the company in a different direction if they were going to find success.

He soon realized that they were actually going to have to go in a lot of different directions at once.

“One of the things that was more difficult than I really estimated ... was diversifying the business,” he said.

The key to connecting Minpack with those diverse clients is the request for quotes (RFQ) process. Many companies will develop a product and then look for a manufacturer. Online services exist to help those companies and manufacturers find each other. The company describes the product in the RFQ, and the manufacturer tells them if they can make it, how they can make it and at what price.

And this is where some ingenuity is required. Minpack has certain tools and facilities available. Will it be possible to stretch those tools to manufacture an unusual product?

With Thompson, the answer is usually yes.

“He loves it,” said Sara Helseth, Minpack’s human resources/marketing manager. “We’re always responding to requests for quotes out of our niche. [Thompson] looks at something new and thinks, ‘How could we do this? How can we build this?’

“That’s my strength,” Thompson said. “I’m not very good at sales or things like that. I’m more about inventing it.”

He estimates that they get about one client for every five RFQs he responds to.

“We get a lot of inquiries that aren’t in our wheelhouse,” he said. “One of the things I try to do is be real honest about our capabilities. I never want to overpromise and underdeliver.”

Over the years, they’ve been part of the process in manufacturing quite a variety of products. They’ve helped make a device capable of blowing room-sized bubbles.  They’ve made medical gear – a drape made of film and used to cover a kidney machine in order to protect it from contamination by any fluids from the kidney. Right now, they’re developing a little pouch that can be used to detect bacteria in water that might corrode oil drilling equipment.

A few years ago three graduate students at MIT came up with an idea for a pencil they called “Sprout.”  The pencil was made of  sustainable cedar and had a capsule at the end with seeds and dirt in it. When the pencil becomes too short to write with, you plant it.

The students couldn’t keep up with demand. So they reached out to Minpack.

“We have made millions and millions of these pencils,” Thompson said.

The Minpack team can talk all day about the odd and interesting devices they’ve put together over the years.

“This is really ... off the wall,” Thompson said. “It’s a piece of plastic about the size of a table. It’s a sled ... to drag a large animal out of the woods after you shoot it.”

“So, we’re in the sporting goods business,” Helseth said, smiling.

Minpack still has a close relationship with 3M, converting and assembling many products for them, and serving as a kind of testing ground when 3M has new products they want to manufacture on a small scale to try out in the marketplace.

But small scale for 3M is serious business for Minpack. One of 3M’s current products is a 3-pack of scissors for the holiday season. Minpack receives the scissors and the packaging and puts them together. All told, they will package 72,000 scissors in an eight-hour shift.

Planning for the future

Thompson has always been considering next steps for the company as it adapts to the changing business environment.

“The packaging business constantly evolves because of sustainability,” he said. “If our philosophy is to be open and look for opportunities we could enjoy a lot more success.

“I really want to see the landfills shrink,” he added emphatically. “I feel like we are terrible contributors. We really have to be open to sustainability as a core value. And when our customers want to do something that we don’t necessarily endorse, we should have a discussion about it, and see if we can help them make that transition.”

And, he’s been mulling over another, more personal transition.

“I wasn’t thinking that I was going to be here for 20 more years,” he said. “My ideal situation would be if someone like myself would appear one day and say, ‘I would like to help you transition out.’ But I’ve got to find that person. They’re not going to just come walking through the door. I could sell [Minpack], but if I do I’m sure that it’ll be broken up and not be here in a few years. That’s what I don’t want to happen. I would feel like I was a failure if I couldn’t keep it here.

Remembering back to where they were when Minpack started up in 2005 makes him chuckle.

“It was a big leap of faith,” Thompson said. “But it has been fun.”

Sorry, there are no recent results for popular commented articles.