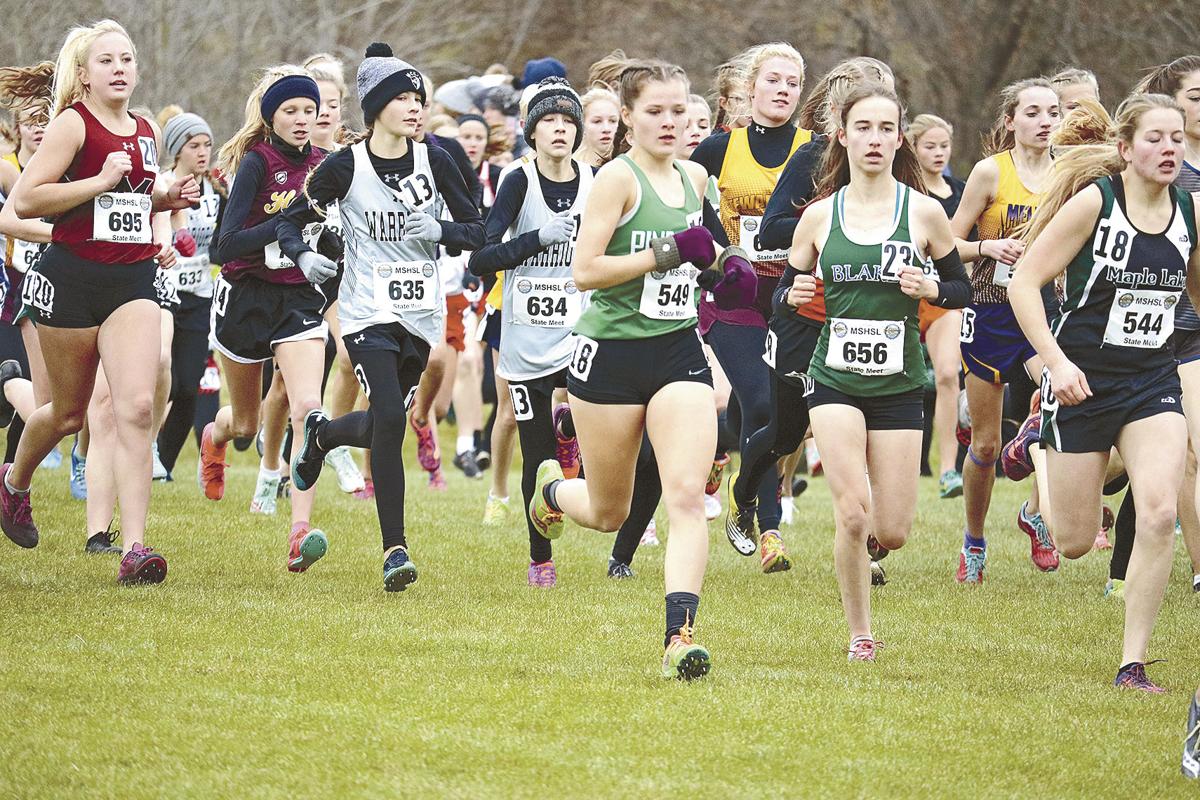 Senior Alaina Steele leads the way at the start of the MSHSL State Cross-country race. 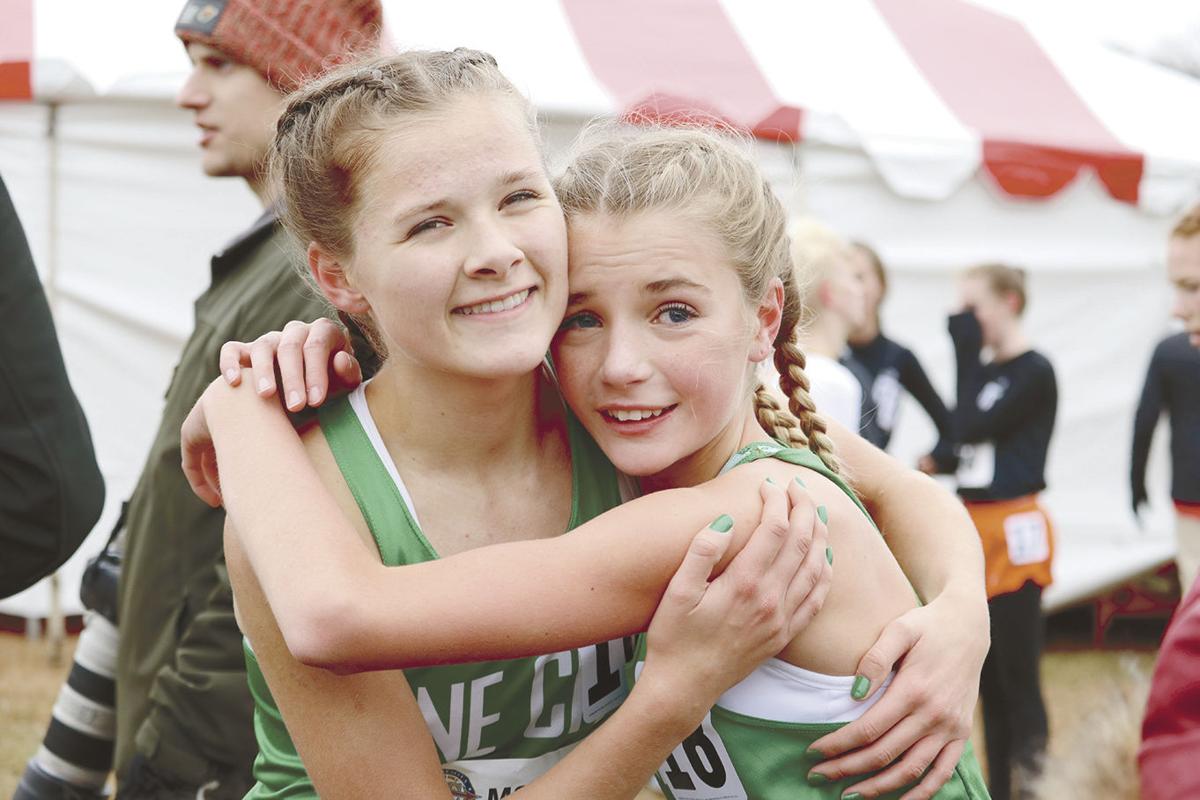 Steele (left) and Johnson share  a hug at State. 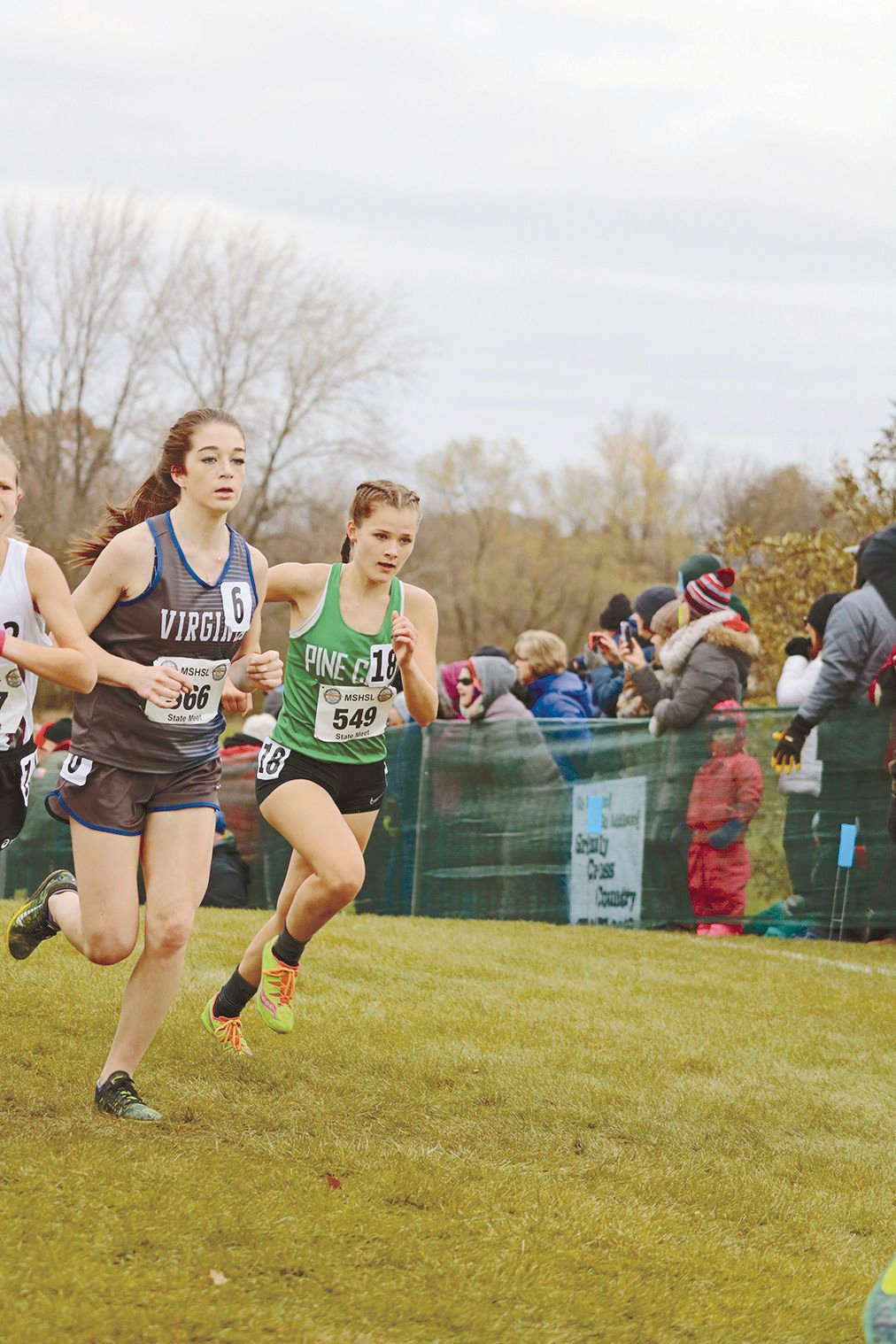 Alaina Steele races neck-and-neck with a Warrior while 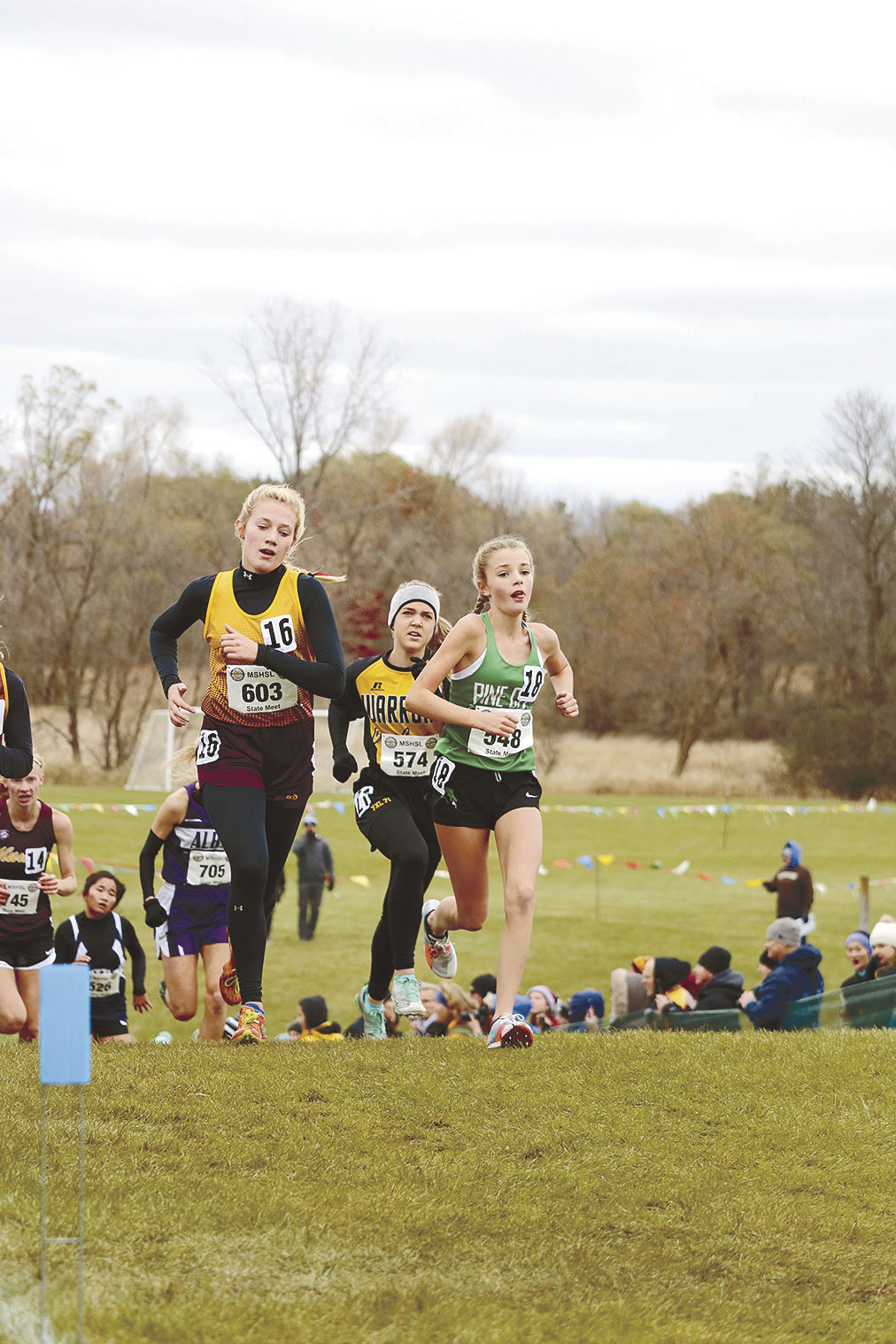 Eva Johnson fights her way up a hill. 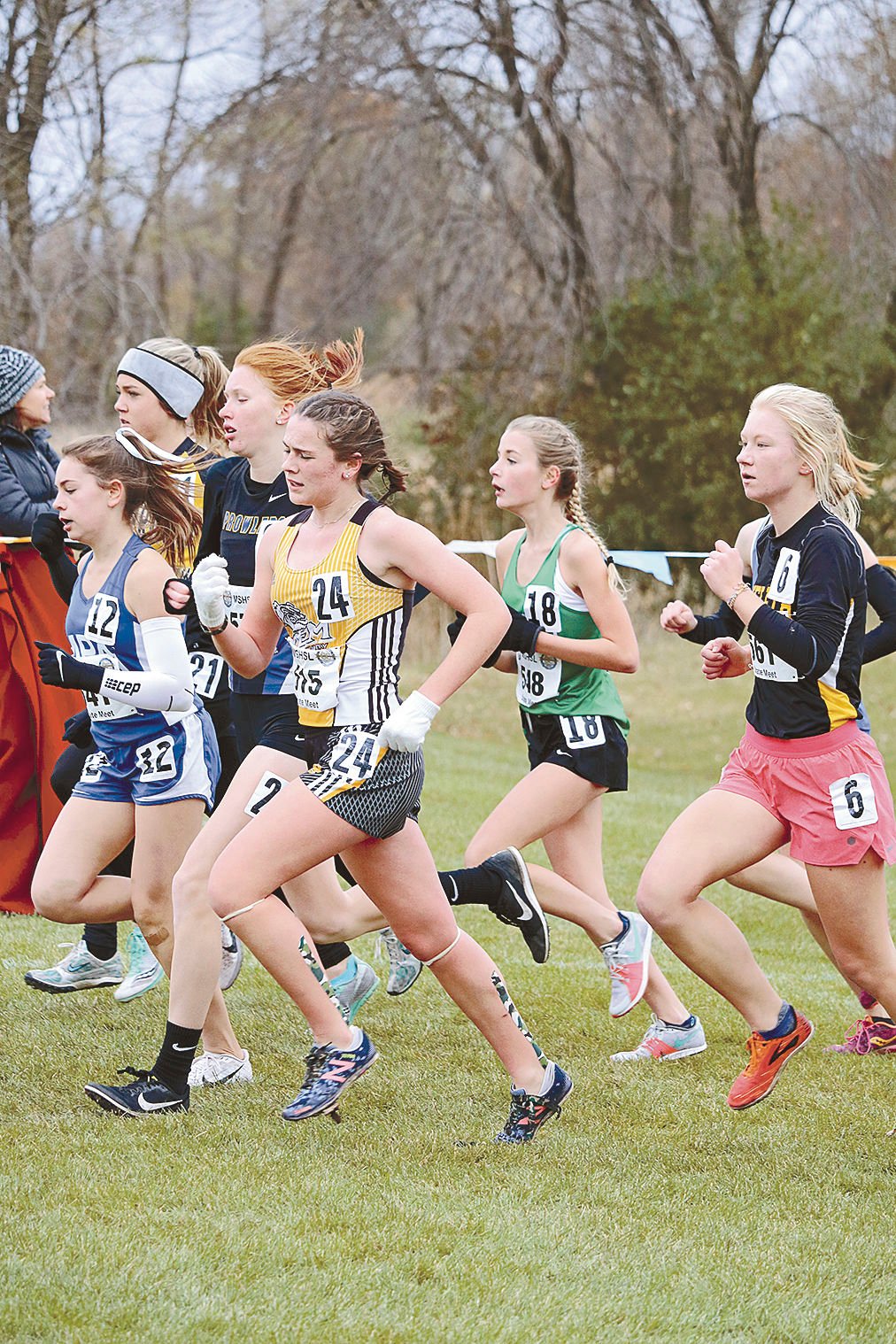 Senior Alaina Steele leads the way at the start of the MSHSL State Cross-country race.

Steele (left) and Johnson share  a hug at State.

Alaina Steele races neck-and-neck with a Warrior while

Eva Johnson fights her way up a hill.

The State cross-country meet was held on Saturday, Nov. 2 at St. Olaf. The weather was overcast, in the mid 30s, and windy. Alaina Steele and Eva Johnson took to the course for Pine City.

Alaina Steele had some ups and downs throughout the race, but found the courage to finish strong in her last high school cross-country race. She went through the first mile in great position at 28th place in a time of 5:59. She unfortunately struggled a little in the second mile and came through the 2-mile marker at 12:42 and was in 50th place. Steele didn’t give in and kept pushing all the way to the end. In the finishing stretch she was able to finish strong and passed seven girls. She finished 43rd out of 176 competitors with a time of 19:58.9. She finishes her high school cross-country career with the five fastest times in school history and 13 out of the top 16 times (Eva Johnson has the other three).

“I am very proud of Alaina and all that she has accomplished over the past six years. She has been a great role model to the younger girls and has shown what can be accomplished through hard work and determination,” said coach Jared Clementson. “I am looking forward to seeing what she can do in her final season of track where she competes in her best event, the 800m run.”

Alaina Steele has been heavily recruited and plans on continuing to compete at the collegiate level.

Eva Johnson ran a very evenly paced race and ran her second fastest time. She went through the first mile in 64th place in a time of 6:06. Johnson stayed steady and came through the 2-mile marker in 12:51 in 66th place. Saving her best part of the race for the finish, she passed seven girls to place 59th in a time of 20:11.0. Her time was only seven seconds off her best time and is the tenth fastest race in school history. Johnson showed a lot of composure for her first time competing at the State meet.

“Eva has been very consistent all season and has become a very competitive runner. It has been a lot of fun watching her gain strength, speed and grit over the past two years,” said coach Clementson. “There is no doubt in my mind that the best is yet to come for Eva.”

Eva Johnson sets high goals for herself and then works hard to accomplish those goals. She will be one of the Dragons’ top runners for the coming seasons.

Johnson and Steele are both very thankful for all the support from their families, friends and teammates that came down to cheer them on. There were over 25 people that came to support these young ladies and they represented Pine City.

“It was very special for Alaina and Eva to have the chance to compete together at the State meet,” said coach Clementson. “They definitely bonded and made memories together.”

Former Dragons (in collegiate action on the same day):